On Thursday, October 29th our ski season officially began! It is a race every year to see which Colorado ski resort can open its lifts first. The race is typically between two resorts – Loveland and Arapahoe Basin.

It was lucky for us that both opened on the same day, lucky that A-Basin is part of our Epic season pass, lucky that both kids were in school and lucky it’s only 30 minutes away!

After dropping the kids off at school we loaded up our trusty “White Shadow” with the gear and headed for A-Basin. The excitement was high as we took the mountain roads between Breck and A-Basin. The views were incredible.

Now, of course, the snow conditions aren’t perfect. Only one lift and one ski run were open. This made for long lift lines and lots of people on the run, which is why they call it the “white ribbon of death”. It was more about being the first people out there this season. Oh, and also about A-Basin’s famous bacon Bloody Mary’s!

I went back to A-Basin again this past Wednesday and Thursday (Kelly wasn’t feeling well).  Both were great days with fresh snow.  The lines weren’t quite as bad during the week (something we hope continues to be the case as the season goes on). 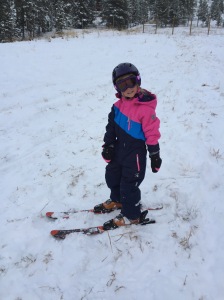 On Friday it was opening day at another resort – Keystone.  This is the resort that I would always go to as a kid when visiting my Aunt Debbie and Uncle Veryl in the winters.  Kelly and I set up a playdate for Alex and headed over in the middle of a snow storm.  That just means fresh snow, right?

Once we got to the lifts we were pleasantly surprised how short it was.  The ski runs were much longer than at A-Basin and snow conditions were absolutely perfect.  That means I have 4 ski days in the books and have 96 (at least) to go.  My goal is to join the Century Club – a ski bum badge of honor.

Kelly and I weren’t the only ones who started skiing.  I took the kids to the sledding hill a couple blocks away at Carter Park.  We did some sledding at first, but then we broke out the skis.  Both of them did great keeping the skis straight and sliding down the hill about 100 feet.  They were giddy with excitement and, of course, so was I!  Check out the videos of the Zoe and Alex below.

The ski season marks the next phase of Project Pink Day.  Pray for snow!

2 thoughts on “Ski season has begun!”