Here is a brief recap of all our visitors, which in total is quite long. Enjoy!

Our first visitors after the snow began to fall were Andrea and Markus. Kelly and I worked with Andrea in Zurich and in Chicago during our Kraft / Mondelez days. They were here over Thanksgiving, so we invited them over for the traditional American feast.

It was a fun night with friends, my brother Dustin and his girlfriend Lara. Especially since Dustin can make a mean turkey and Lara cooked most of the sides. My job was to bake the rolls (Pilsbury crescents) and I burned them. Oops! 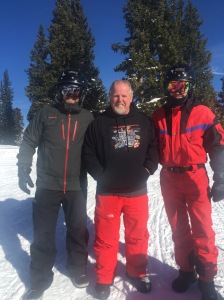 Zoe and Markus were fast friends and played with the toy kitchen. Andrea and Kelly were able to catch up. We all got to relax.

After we came back from Christmas with Kelly’s family in Wisconsin, we hosted Christmas for my family in Breck. My mom flew in from Charlotte, my dad drove in from Iowa and brother Dustin and his girlfriend Lara joined us from Denver.

It was a nice relaxing holiday with time spent around cozy fires, some skiing (of course) and even took my dad out for a snowmobile tour. The snowmobile tour was with Good Times Adventures. We cruised through the trees and climbed a couple thousand feet up to a cool lookout point.

We really enjoyed having everyone together for the holidays. It was a good reminder that we need to value time with family above material things.

Another great thing about living in a resort town is that tons of people love coming out here to ski… even some of Zoe’s friends (and their families of course) from back in Illinois.

Just after Christmas, one of Zoe’s former pre-school friends Sabrina was in Vail for their holiday. We setup a playdate for the girls to reconnect.

A couple of months later another one of Zoe’s friends (and first crush) Michael and his family were skiing in Breckenridge. We didn’t realize it until their very last night in town, but we were able to meet for a quick drink so they could see each other.

We think it helps Zoe realize that even if we move to new places, that she can keep her friends from anywhere. 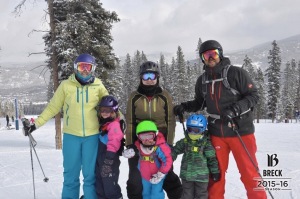 A former co-worker, Michelle and her daughter Olivia came to visit in January. Michelle had skied for years, but this was Olivia’s first time out on the slopes. She did great and all of us had a blast on the mountain together.

We started Olivia out in the learning area with the “magic carpet” and she and the kids had fun going up and down. Zoe and Alex even thought it’d be funny to try going backwards – riding switch! Surprisingly they did ok.

Olivia is Alex’s age and both Zoe and Alex loved her – they played really nicely, which helped Michelle and Kelly sneak away a couple of times to grab a drink and catch-up. Good times! 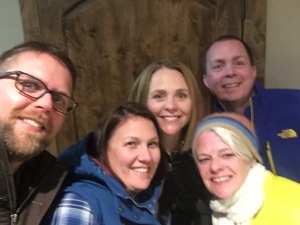 Our good friend Kirsten and daughter Bea made the long flight from New Jersey to Eagle-Vail for a ski weekend trip. So, we all hopped in the car and picked them up at the airport.

They had been to Breckenridge just last year, but came back now that we were here. The first day Bea took a ski lesson, which allowed Kelly, Kirsten and I to hit the slopes hard on the first day. We got to ski with Bea the rest of their visit.

Zoe and Alex loved having Bea back to play with. She is a bit older so they have always been a bit enamored by her big kid ways. They loved showing her all their new things in our new home.

A couple days after Kirsten and Bea arrived, so did Jeremy and Davilynn. It was perfect that they overlapped as we all lived in Zurich at the same time. They left their two kids at home, so we got a babysitter and headed out to our new favorite restaurant in town, Twist.

Unfortunately, Kelly twisted her knee skiing on the first day Jeremy and Davilynn got here. But, of course, she could still hold us a table at the bar while we got in some runs. I took Jeremy up to the top of Imperial (highest lift in North America). The snow conditions were good and the sun was shining. 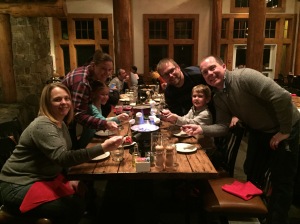 in Keystone.  It was really cool to travel to the top of a remote mountain for dinner.  It takes two gondola rides to get there and the views are spectacular.  It was something I always had wanted to do since I
was kid and was great to share that experience with my family and such good friends.  Zoe even became a little famous at the restaurant when she joined the 2-person German band as their tiny dancer as they went table to table!

It was great having the gang back together again. Reminded us all of how much fun we had running amuck in Zurich, Switzerland and across Europe. Just wish Helen, Richie and Katy could have joined us too. 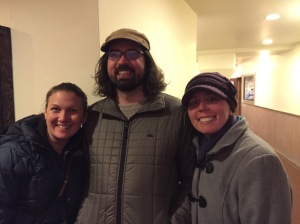 Kelly’s cousin Kim and her husband Mike live down in Denver, but we hadn’t skied with them yet this year. Kim’s brother, Kyle (and Kelly’s cousin of course) came to town and they rented a place at the base of Peak 9 for a ski week.
We enjoyed our time with them catching up over drinks between our ski runs and on lift rides. Kim had some really good one liners – just ask her what part of the peacock she is.

It was also nice having access to a pool and hot tub. Zoe and Alex swam like crazy in the pool that was indoor/outdoor so they could swim under the wall.

It was a sunny week with a little bit of fresh snow mid-week to keep things soft and covered. It was great having them all here, except poor Mike had to head back to Denver during the week for work. At least he got to visit on the weekends.

A former Kraft / Mondelez colleague of mine, Michael, and his wife Ruth decided to trade the Swiss Alps for the Rocky Mountains for a two week vacation and chose Breckenridge as their hub.

With so many other visitors in town at the same time, it took until his last day in Breckenridge for us to connect. But, we were able to have a drink at his hotel one afternoon and catch-up. It was the first time meeting Ruth too.

It was nice catching up on life and how things were going for our other colleagues back in Zurich. It just goes to show that we have some pretty great former colleagues that we will keep as friends forever.

I went to college and was in the same fraternity as Chad and Dusty. I was even roommates with Dusty my (first) senior year. We hadn’t seen each other in years, but when they said they were coming out to Breck we knew we’d have to meet up.

Chad brought his oldest son along too, as he was in ski school a couple of those days, we got to get some runs in together. It was fun to cruise the mountain with them and catch-up.

We even got Chad, Dusty, Kelly and the kids together and headed out for dinner and then to Broken Compass for some good beers. The three guys then put the woman and children to bed and headed out for what ended up being a late, but really fun night. Hope to see them back next year!

While Zoe and Alex were down with the flu, Kelly escaped the sick nest to meet up with her friends Jareb and Georgia from her college days at UW-Madison.  She enjoyed meeting their cute kids as well and hearing about their awesome ski week at A-Basin. We would have loved to spend time on the mountain with them.  Darn flu!

Kelly’s brother John, Mandy and our nephews Jack and Charlie braved the 16+ hour road trip from Slinger, WI to Breck. It was the 2nd time they’d visited us since we started Project Pink Day. First time was when we were in Ft Myers Beach.

We were thrilled we got to share our new home and town with them. Neither of the boys (nor their mom, Mandy) had skied before, so we decided to go easy the first day and stick only to the learning area and magic carpet. Besides it wouldn’t cost them a lift ticket!

It was a pleasant surprise how quickly they picked it up. By the second day we had them out on Peak 9 beginner runs, Spooky and Ripper Roos forests.   Our proudest moments were when they just wanted to go again and again! Charlie especially got the ski bug!

Zoe and Alex had school and Travis was meeting a friend in Keystone on Tuesday, so the Puls fam and Kelly tried out cross-country skiing. Something that she’d been wanting to try all season long. It was a really nice day and everyone had fun. And, Kelly realized that going downhill on cross-country skis is a bit different than alpine skiing.  She has the bruises to prove it!

The rest of the trip was very relaxing with Zoe and Alex loving having their cousins around to play with. Miss them already and was another reminder that living away from family has its downside too. 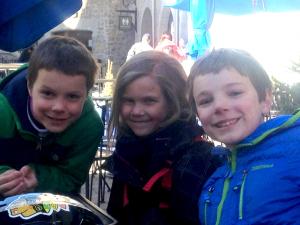 Our friends from Evanston were vacationing in Vail for Spring Break this year.  We worked with Amy at Kraft years ago and have been friends with her and her husband Matt for years.  They brought out their three adorable kiddos Nicholas, Sam and Isabell who were great skiers.

It was the first time that Zoe and Alex had ever skied in Vail, so they were excited to try out a new mountain and see some old friends.  It was also Pink Vail Day where hundreds of people dress up in pink to raise awareness and raise money for cancer research, so we fit right in!

It was a beautiful, warm day so we did lots of runs with the kids and grabbed lunch.  We actually found a table, which was impressive considering how busy it was for the Pink Vail event.  After a few more runs we grabbed a drink in Vail Village before heading home.  It was a lot of fun to catch-up and see our kids playing in a mountain town. 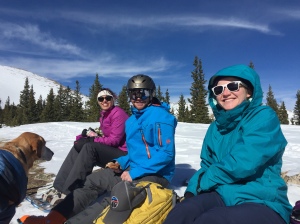 Of course, one of the great things about living near Denver is that my brother Dustin is close by and visits every weekend possible.  We’ve gotten to see him, his girlfriend Lara and their dog Maverick (Mav) a lot since we have moved here and it’s been so great spending time together.  Just another reason why we feel like Breckenridge is the right home for us.  Plus, we don’t need to get a dog – as Mav is our adopted pet that Alex has been known to have snuggle-fests with.

They also bring some of their friends along too.  It’s been great getting to know Lama, Steve, Dusty and many others.  They’re all fun to hang out with and are really great with the kids too.

Now that the ski season is coming to an end, I’m sure the visitors will slow down.  Then again, we have said that for months.  Guess time will tell!

One thought on “When our skiing friends come to town”